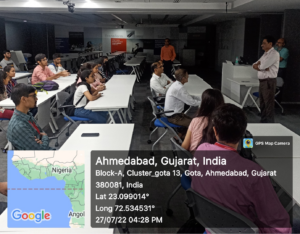 Department of Electronics and Communication Engineering of Institute of Technology, Nirma University and eInfochips have jointly organized a Hackathon, sponsored by eInfochips. The two themes for Hackathon were “Smart Transportation” and “Smart Agriculture”. A total of 54 students participated in 20 different teams.

As an activity of hackathon all the registered participants visited eInfochips on July 27, 2022; where Mr. Anand Shah (Program Manager, eInfochips) and Mr. Sudhir Naik (Co-founder, eInfochips) addressed the participants and motivated to submit and work on some ideas which are beneficial for society at large.

Then after the participant teams submitted their ideas, they were scrutinized in two stages. An award ceremony was scheduled on September 9, 2022 during which three winner teams from both the themes were announced. The award ceremony was graced by presence of Dr. R N Patel, Director, Institute of Technology, Nirma University. Dr. R N Patel, Dr. Usha Mehta (HOD-EC), Mr. Anand Shah, Mr. Sudhir Naik and Mr. Nilesh Ranpura (ASIC Director, eInfochips) distributed the certificates and awarded the winners.